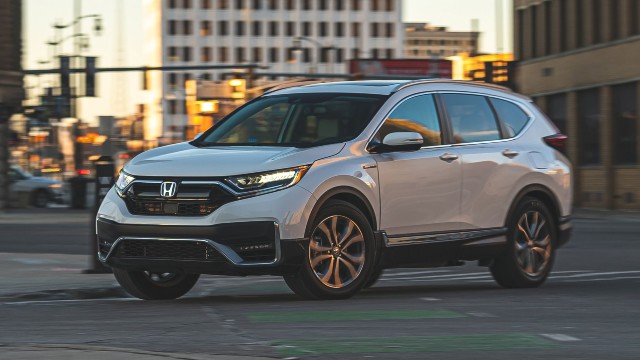 A few weeks ago, we saw a disguised new 2023 Honda CR-V prototype at European testing. The prototype implies that Honda is planning to debut the sixth-gen CR-V next year, with a revised design and new dimensions. This means the new-gen CR-V will bring a lot of updates and some of them will be dramatic. Interestingly, but the exterior won’t suffer a complete redesign. Instead, we expect a nice facelift so the new CR-V will gain an even more modern look.

On the other hand, changes inside the cabin are significant. One of the biggest upgrades in 2023MY could be an optional third-row. Unfortunately, we don’t know if something will change under the hood. The CR-V model already offers a plug-in hybrid powertrain, so we expect Honda to embrace the electrification a bit further.

First spy photos and renderings of the new 2023 Honda CR-V are already here. As we said, the next-gen model won’t introduce a complete exterior redesign. Instead, Honda will deliver a nice facelift. The most noticeable modification for the new CR-V is the redesigned front end. It features a new nose, which gives the crossover a tougher appearance. There is also a large trapezoidal grille that becomes broader towards the top. Narrower headlights are looking angular on the spy photos.

Just beneath the hood, you can spot new shiny trims as well. The vehicle’s sides are looking simple once again, evoking the current Passport and Pilot variants. Along the shoulder line, there is a noticeable wrinkle. The spy pictures provided a view of the back of the CR-V, which has a chiseled form, similar to the front. It seems like the rear window is steeper, making the tail appear sharper. The taillights are also slightly modified.

Interior Gets Optional Third-Row of Seats

As we already said, the 2023 Honda CR-V will slightly grow in size. It’ll be fascinating to see if the increased interior space prompts Honda to add a third row, or if the Pilot will remain the company’s sole SUV in the United States with seven seats.

Aside from that, the current CR-V is already available in several regions with a third row, but the US-spec vehicle is only available with five seats. It does make perfect sense, as some rivals such as Kia Sorento and Volkswagen Tiguan are already offering a room for seven. Besides that, Honda will introduce a larger infotainment display, redesigned dashboard, and improved safety ratings.

What About Engine Options?

The current CR-V model already offers hybrid and plug-in hybrid variants. As for the 2023 Honda CR-V, we don’t know if this model will introduce something new. The most logical outcome is Honda improving current hybrid models in terms of power and efficiency.

The all-electric variant won’t happen for sure in the near future. Depending on the market, CR-V also offers combustion engines. Right now, you can opt for a standard 1.5-liter turbo-four engine with 190 horsepower and 180 lb-ft of torque. This engine delivers 34 mpg combined, while the plug-in hybrid variant provides over 40 mpg.

Larger dimensions, new design, additional high-tech amenities, and third-row of seats will surely increase the price of the 2023 Honda CR-V. The next-gen model will now cost slightly above $25,000. The hybrid variant will cost around $29,000, but this is not official yet. Honda will launch a new CR-V crossover at some point next year, probably in the second half.