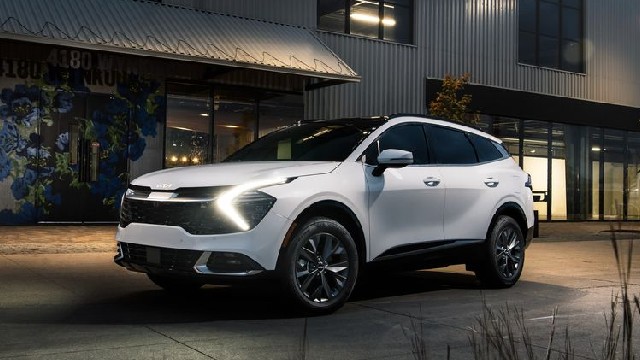 The rumors around the updated  2024 Kia Sportage are becoming correct. The Sportage SUV underwent a complete redesign this year, therefore we anticipate that the following version will be a carryover. According to what we now know, the next Sportage will have a more daring exterior, a longer wheelbase, more features, and more power.

Three engines will be on offer. This means the Sportage model will offer a very modern lineup, which includes a nice combination of the traditional combustion engines and a plug-in hybrid powertrain. Kia also provides numerous trim levels and packages. Generally, Sportage is a very modern SUV with lots of customization.

The upcoming 2024 Kia Sportage will continue to feature one of the most distinctive designs on the market, with a very modern appearance. Its grille, which is divided into two sections by a horizontal bar, looks impressive and also recognizable. Moreover, daytime running lights (DRLs) are even more appealing, finished in a boomerang-like shape.

They give this SUV a sharper appearance but the rear section is also expertly designed, with taillights joined by a black trim piece. In terms of cosmetic upgrades, Kia Sportage will gain minor improvements only.

Interior-wise, the 2024 Kia Sportage most likely won’t differ from the current model. Naturally, the manufacturer will unveil a couple of minor refinements. A larger touchscreen and a standard set of technologies are a possibility. We also expect to see a wireless charging pad and a powerful Harman Kardon audio system to be available as an option.

The Sportage SUV also comes with an optional digital instrument cluster. This model has a significant number of standard safety features, which is important to note. The comfort is admirable and there is also lots of passenger room inside the cabin. Again, Kia will only deliver a couple of minor updates, so don’t expect big surprises.

The forthcoming 2024 Kia Sportage will offer three powertrain options. Everything starts with a base 2.5-liter four-cylinder gasoline unit that develops slightly above 200 horsepower. 8-speed automatic transmission is available, as before. However, Kia also offers regular hybrid and plug-in hybrid variants. Both systems are using the same 1.6-liter turbo-four engine, using a 6-speed automatic gearbox.

The regular hybrid deploys a 44.2-kW motor, while the Sportage PHEV model has a 66.9-kW electric motor. Moreover, the plug-in hybrid version comes with a 13.8-kWh battery pack. In terms of power, the base hybrid setup produces 226 horsepower, while the plug-in hybrid generates up to 260 horsepower. We are waiting to hear more details, as many reports are predicting even more power for the Sportage SUV.

With minor upgrades on the way, the new 2024 Kia Sportage should have the same starting price as the outgoing model. Therefore, the price will start at around $25,000 or slightly above that. On the other hand, the range-topping Sportage X Line Prestige Hybrid trim level will cost $45,000.

From what we know, the new model will arrive at some point in the second half of 2023. As we said, Kia will reveal more info in the coming weeks. Still, we don’t expect any sort of major upgrade anytime soon.