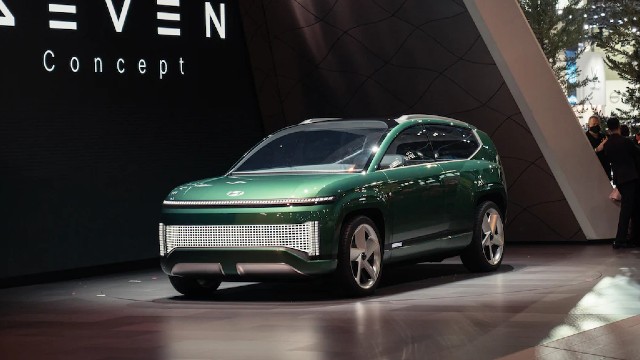 The brand-new 2024 Hyundai Ioniq 7 is coming to the markets later in 2023. This model will be dimensionally closer to the Palisade SUV. The Ioniq 7 will sit on the E-GMP architecture. The same platform also underpins Kia EV and Ioniq 5 models. As for the Ioniq 7, the concept looks very promising and unique.

Hopefully, Hyundai will be able to apply the original idea to the production model. This crossover will feature distinctive wheels, an impressive lighting system, and glass panels. The design language is recognizable and the interior will look very modern. The Ioniq 7 will provide over 300 miles of driving range on a single charge.

The SUV that will share a chassis and electric engine with the next Kia EV9 is the 2024 Hyundai Ioniq 7. The new model is still in the stage of concept, but production of the vehicle is set to begin Insights from Hyundai have been few, but based on what we know, the upcoming model will appear to be highly futuristic.

It will sport the most recent Hyundai design language, which includes a huge grille and striking headlights. It won’t look much less appealing from the back, and there will likely be a lot of parallels to the Kia EV9.

The all-new 2024 Hyundai Ioniq 7 concept shows how large cabin space can be produced when the body of a three-row SUV is mated with a completely flat floor. Hyundai makes the most of the collaboration by eschewing traditional chair rows in favor of flexible configurations that might create a lounge-like atmosphere.

The Ioniq 7 will have a unique steering wheel, or to say a control stick. This often sounds worse than Tesla’s yoke steering wheel. A built-in mini-fridge and a room to “refresh passengers’ footwear” are also included in the design. The latest OLED display, which made its debut in the most recent Mercedes S-Class, is the focal point, though.

So far, we don’t know that much about the performance of the 2024 Hyundai Ioniq 7. For a start, battery size is a complete mystery. However, we know that the Hyundai will offer at least two battery sizes.

The largest battery pack will reportedly provide at least 300 miles of driving range on a single charge. The manufacturer plans to offer a 350-kW fast charger. Thanks to that, you can charge your Ioniq 7 from 10 to 80 percent in roughly 20 minutes. More details will become available in the following months.

The upcoming 2024 Hyundai Ioniq 7 will cost around $50,000, per reports. Of course, the price is far from official, so this is just another bold prediction. This crossover will have three trim levels, like the Ioniq 5. The sales will begin in the second half of 2023, so we are still waiting for the first official details.