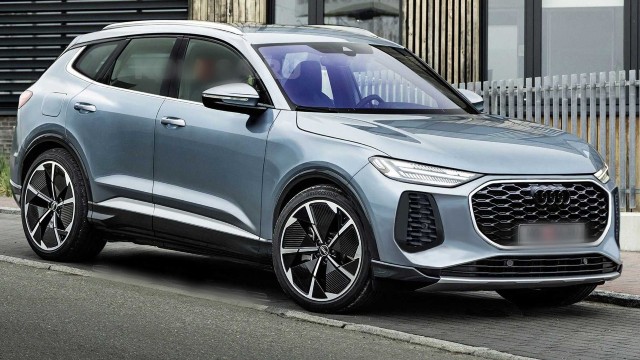 We finally have the first group of renderings for the new-gen 2024 Audi Q5, following the previous spy images. The new SUV has a more modern appearance, and it gets the same treatment as Audi’s latest electric crossover, the Q4 E-Tron. The front fascia is identical to the previous version, with a little increase in size.

In addition, the latest Audi Q5 has side mirrors that are positioned at the base, as opposed to the previous mirrors that are pushed back towards the driver. The redesigned model is expected to arrive in 2023, most likely in the summer. Here is everything you need to know about this approaching SUV.

The first spy pictures of the next 2024 Audi Q5 are already online, and the new SUV does appear to be sportier. To begin with, the next-gen Q5 SUV has been spotted testing with an all-new front fascia. The manufacturer appears to have employed the same procedure as on the Q4 E-Tron.

A new grille, slimmer headlamps, new air, and a larger bumper are now providing a more aggressive look. We also noticed that the SUV is slightly longer than the existing Q5, which is likely due to a new hybrid powertrain option. We can expect more legroom and cargo space as a result of this. The rear section sports very modern taillights and a new bumper, like on the front part.

There are currently no photographs of the interior available. The upcoming 2024 Audi Q5 is expected to include a full new interior with additional passenger space. This means a new cabin arrangement with some of Audi’s newest displays is on the way. Of course, this SUV will get more standard equipment and the latest high-tech amenities.

That includes numerous driver-assistance aids as well. As standard, from now on, the Q5 model will offer blind-spot monitors, forward-collision warnings, cameras, and sensors. Still, this SUV will not offer some sort of autonomous driving.

The new 2024 Audi Q5 is a mystery in terms of engine lineup at the moment. The current Q5 is equipped with a 2.0-liter turbo-four engine, a 7-speed dual-clutch automatic transmission, and Audi’s Quattro all-wheel drive. The base model produces 201 horsepower and 236 lb-ft of torque. To reach 60 mph takes 6.8 seconds, which is about average for this segment.

A more powerful mild-hybrid configuration is also available from the manufacturer. This model has 261 horsepower and a torque of 273 lb-ft, and it is slightly faster, clocking in at 5.7 seconds. A plug-in hybrid system with a 17.9 kWh battery is the most powerful one. This powertrain option develops up to 362 hp and 370 lb-ft of torque.

The upcoming 2024 Audi Q5 will cost more than the outgoing model. This is the only logical outcome, as this is the new-generation Q5 with significant upgrades. Therefore, the price will start at around $45,000.

The upper trim levels with more luxury will cost above $60k. One thing won’t change and that’s the Q5’s rivals. This model will continue to compete with other luxury SUVs such as Acura RDX, Mercedes-Benz GLC, and BMW X3.