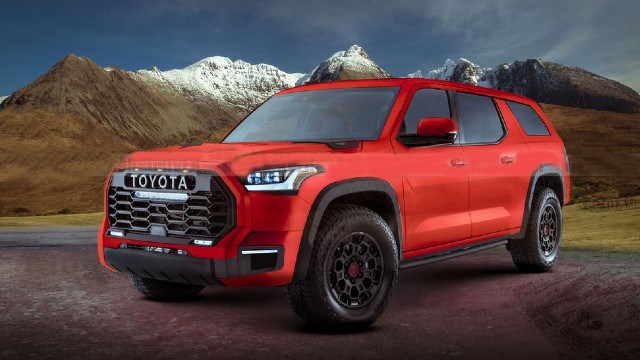 According to recent rumors, various upgrades will be made to the upcoming 2023 Toyota Sequoia. The Sequoia, like the Tundra before it, will be closely linked. In principle, both variants will ride on the same architecture and will most likely share the same twin-turbo V6 engine.

A new Tundra truck should debut in the first quarter of next year, which can only mean a new Sequoia will follow soon after. Toyota’s new SUV will sit on the TNGA-F body-on-frame chassis, which also underpins the the 300-series Land Cruiser.

Right now, Sequoia offers a potent V8 engine that can produce 380 horsepower. However, it will most likely be replaced by a twin-turbo 3.4-liter V6 gasoline engine. We also anticipate the new Tundra to provide the same engine. The Land Cruiser’s version of this engine produces about 410 horsepower and 480 lb-ft of torque.

A hybrid drivetrain with a six-cylinder engine is also a possibility, as seen by the blue writing in a teaser image. Each engine will very certainly come with a 10-speed automatic transmission and driven by a rear-wheel-drive system. Four-wheel-drive versions, on the other hand, will be available as an option.

Toyota just released some interior features for the 2023 Toyota Sequoia. With a bigger center-mounted display with Apple CarPlay compatibility and a JBL sound system, the interior should be more contemporary. Overall, the interior of the Sequoia model will be better than ever before, with more quality materials.

There are several competitors, and Ford is planning to upgrade its full-size Expedition SUV with a new 10.2-inch touchscreen. The Chevy Tahoe model will also receive the same makeover. The arrangement will stay the same, and the new Sequoia should easily seat seven people.

The forthcoming 2023 Toyota Sequoia SUV is based on the same truck chassis as the most recent Tundra. The new model will appear more aggressive than previously, according to the latest renderings. The front and back of the SUV are basically new, giving it a more truck-like appearance. The distinctions between Tundra and Sequoia, on the other hand, are now even more minor.

The headlamps and grille on both versions are identical, although Sequoia’s design is less striking than the new Tundra’s. We should expect Sequoia to get the same treatment as the Tundra’s off-road-focused TRD Pro variant, based on current information.

According to the latest reports, Toyota may unveil the third-generation Sequoia full-size SUV soon after the Tundra pickup truck. It will enter the production in the brand’s plant in, Texas, alongside the Tundra truck. The highlights of the forthcoming 2023 Toyota Sequoia are exterior redesign and a new twin-turbo engine option.

In terms of pricing, it will undoubtedly increase. The entry-level model should start at about $60,000. If you’re looking for an SUV with third-row seating, loads of standard driver-assistance technology, and a powerful engine, the brand-new Sequoia might be the way to go.