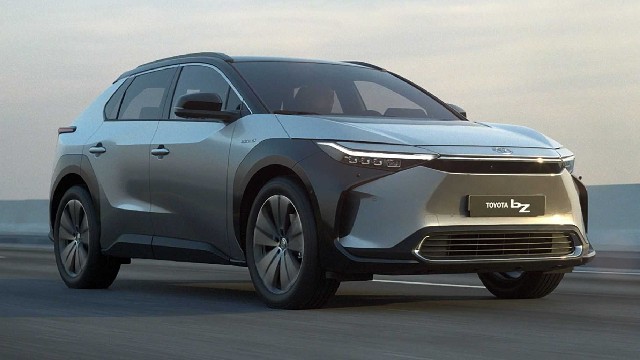 The upcoming 2023 Toyota bz4X is a brand-new electric crossover. According to the manufacturer, the next model will be distinguished from the rest of the lineup in a variety of ways. First and foremost, the electric crossover is sized between the C-HR and the RAV4 models, and it is the first to bear the “bZ” logo. Although the bZ4X has a new design language, it appears to be based on Lexus design language. This model comes with dominating front fascia, dynamic lines, and a familiar grille.

According to the latest information, the bZ4X will make its premiere at the Shanghai Auto Show next year, and production should begin soon after. Surprisingly, it will be sold all in the U.S. and it will be a global model, which is great to hear.

The new design language of the 2023 Toyota bZ4X makes it look appealing. As previously said, this SUV design is reminiscent of and readily confused with several Lexus SUVs. The bZ4X has unusual proportions due to its small overhangs and larger wheelbase. The front fascia dominates, as it does on many modern automobiles, with sporty lines, air vents, and a grille nose that defines it as an electric vehicle.

Furthermore, we noticed appealing black trim that sides the sleek headlamps and runs all the way to the wheel arches. Aside from the front section, the new model will be stunning from the back. It has a narrow LED strip connecting the taillights, which looks very modern.

The interior of the forthcoming 2023 Toyota bz4X appears beautiful and sophisticated. Unlike the other Toyota models, this one has a distinctive cabin that we haven’t seen before. It also features an additional cabin space with room for five occupants.

In terms of technology, the new SUV has a large infotainment screen, which helps to the luxury appearance. We really appreciate the redesigned aircraft steering wheel, the three-tone upholstery, and the gray fabric that covers the dash. Toyota, surprisingly, replaced the standard shifter with a rotary gear selector and installed a smaller screen in front of the driver.Lastly, we know that the Toyota will introduce new Safety Sense 3.0 suite.

According to the information provided, the 2023 Toyota bZ4X should be driven by powerful motors and a large battery capacity. As previously stated, this model will be the first to utilize Toyota’s innovative e-TNGA architecture. With a fully charged battery, this model should deliver at least 250-300 miles of a driving range because of the light base and battery pack.

Potential rivals such as Ford Mustang Mach-E and Volkswagen ID4 will provide a similar driving range. Toyota also claims that it will be capable of quick charging. However, there is no information at this time as to whether this model will support FWD, although an all-wheel-drive system is mandatory.

The production of the 2023 Toyota bZ4X will begin in the coming months, with sales following soon after. Toyota’s first all-electric car will be this SUV.

We anticipate it will have a powerful electric motor, a large battery, and all-wheel-drive capability. Nonetheless, for a model that costs roughly $36,000, it will undoubtedly entice a large number of clients.