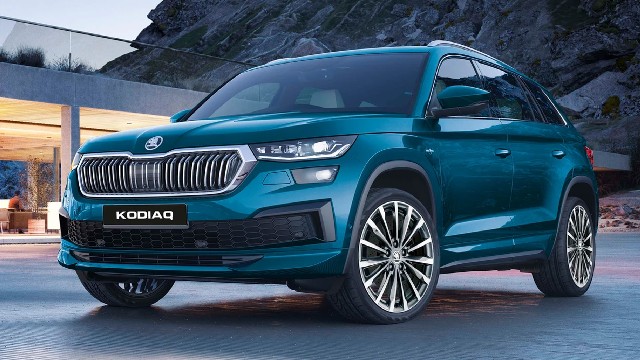 The 2023 Skoda Kodiaq will go on sale later this year and we expect a couple of improvements. The current model of Skoda’s flagship SUV has been in production for seven years. Since the current model already introduced some dramatic updates, the next one will get minor or mild changes. That could include minor styling tweaks, new exterior colors, and more standard amenities.

This SUV has a ton of cargo space and is roomy and comfy. We really appreciate the build quality and the array of standard and optional accessories. Last but not least, there is a respectable selection of engines that offers both gasoline and diesel choices.

Given the makeover from the previous year, we can be very certain that the 2023 Skoda Kodiaq won’t include any other significant upgrades. Although there is always a potential to see additional features, like new exterior paints, the general design will not change. The current model arrived with a new grille and thinner headlamps. On top of that, Kodiaq now wears a new hood, new bumpers, and a new roof spoiler.

Since the first introduction, not much has changed mechanically. This SUV is based on the company’s well-known MQB architecture. The driving experience is also quite good, and everything seems to have been put together neatly. Lastly, a new model could gain new optional wheels or some sort of optional appearance package.

The forthcoming 2023 Skoda Kodiaq will maintain the same interior design, which is straightforward and traditional. Although the dash isn’t the most beautiful on the market, it has good construction. Everything has a sturdy feel, and the materials themselves are good. Additionally, the soundproofing is rather good. However, the quantity of layout room is Kodiaq’s strongest suit.

The front seats are fairly roomy and very comfortable. The second row is just as roomy and easily fits three persons. The third row, on the other hand, is a little bit more constricted and is only suitable for children. The cargo area in this SUV is generous too. As for the upgrades, the interior should receive small technological updates and new safety features.

The next 2023 Skoda Kodiaq will continue to offer the same engine lineup. A 1.5-liter turbo-four gasoline engine with about 150 horsepower and 250 lb-ft of torque will continue to power base versions. There is also an optional 2.0-lite turbo-four, which comes in several power configurations. It is available in a 190-horsepower variant, as well as a 245-horsepower high-performance RS model.

Of course, there are models available with the trusted 2.0-liter TDI turbodiesel. As before, the FWD system comes as standard, but you can get an optional AWD setup as well. While the other engines are only available with a dual-clutch transmission, the base petrol engine may be paired with either a 6-speed manual or a dual-clutch gearbox.

The price of the new 2023 Skoda Kodiaq will start between $30,000 and $35,000 once again. However, the price is not official yet, so we are waiting for Skoda to reveal more details. The sales will begin later this year, most likely in late fall.