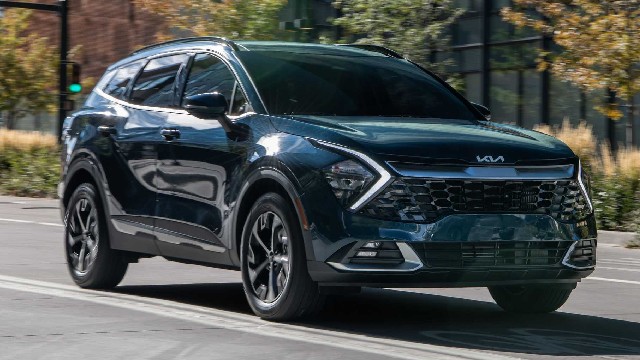 New 2023 Kia Sportage Hybrid is already in the works. This amazing SUV will reportedly arrive in the second half of 2022. Last month, Kia debuted the Sportage model with new looks and a more stylish cabin. Moreover, a brand-new 2.5-liter engine is also here.

Now, the Sportage SUV will gain a hybrid powertrain. The hybrid system will enhance the performance, both in terms of power and efficiency. Some things will be shared with the Hyundai Tucson model, which is interesting, but not surprising. Here’s everything you need to know about the Sportage Hybrid model.

The taillights at the back are the same as those on the new Kia EV6 electric car. There is more of a rise in the beltline as the greenhouse slopes down toward D-pillar. Because of that, you’ll get a sense of the rakish model with the coupe-like roofline, which is what you see on high-end SUVs like this one.

The cabin of the 2023 Kia Sportage Hybrid looks a lot better than the one before it. A digital instrument cluster and a huge widescreen infotainment system look like they’re behind a single pane of glass in this car. On the middle stack, there is a rotary shifter as well as a lot of buttons. Sportage models have a lot of soft-touch parts. Tri-zone climate control is standard, as well as some new safety aids that make the car safer.

New upholstery and high-tech features have already been added to the current model, so nothing will change in this area. Still, Sportage is a premium SUV, with a 12.3-inch touchscreen and 12.3-inch digital instrument cluster. The hybrid variant will also include wireless phone charging and a new Harman-Kardon sound system.

The upcoming 2023 Kia Sportage Hybrid comes with a 1.6-liter engine and a 44-kilowatt electric motor. Moreover, there is a 1.5-kWh lithium-ion battery pack. This output develops an astonishing 226 horsepower. This is a great improvement over the regular Sportage model with 187 horsepower. More importantly, the Sportage Hybrid model gets 39 mpg combined.

As you can see, the hybrid variant is a significantly better choice than the regular Sportage SUV. This model can tow up to 2,000 pounds. A six-speed automatic transmission is standard, and you can choose between standard FWD or optional AWD setups.

The approaching 2023 Kia Sportage Hybrid will join the lineup in the coming months. We don’t know when exactly the sales will start, but it should happen later in 2022. The price of the regular model starts at $25,000 so the hybrid version will surely cost above $30,000.