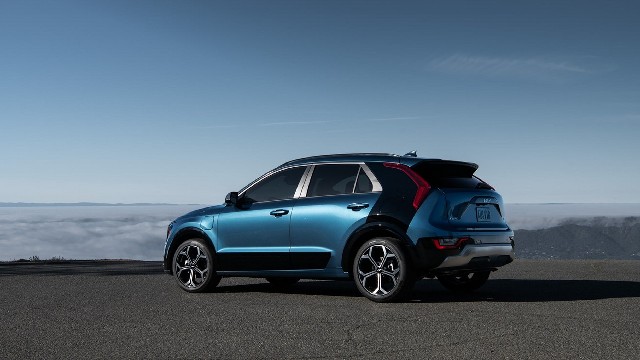 This summer, the far more appealing 2023 Kia Niro will attempt to win a mid-size market in the United States. The new model will have numerous advantages over the outgoing Niro model. The Niro crossover will hit the roads in hybrid, plug-in hybrid, and all-electric configurations. Aside from engines, the new model will apparently be slightly larger than previous models.

Inside, we should expect various improvements, such as higher-quality materials, a huge 10.3-inch touchscreen, and a digital gauge cluster. Furthermore, the carmaker incorporated further driver-assistance systems into the Niro, so the new model will be safer than ever before.

The upcoming 2023 Kia Niro has a really appealing styling. Furthermore, all of the variants described are around 2.5 inches larger than the previous counterparts. However, none of this grabs your attention as much as the “aero blade” visible behind the c-Pillar.

This impressive body panel extends from the top to the wheel and stands out from the rest of the body due to the big air vent. The new Niro is unquestionably more appealing than its predecessor, and it inherits some of the sharper snouts of the all-electric Kia EV6 hatchback. Also, it looks sportier than before, so we think the 2023 Niro will be the best one yet.

The upcoming 2023 Kia Niro appears to be more sophisticated than ever, especially in terms of cabin design. Because of its larger size, this crossover has a more spacious interior. The comfort is assured, and the Niro provides ample space for five occupants in two rows of seats. Unlike the previous model, the new one appears to be more technologically advanced.

It has a 10.3-inch  touchscreen in the middle, as well as a digital gauge cluster. Kia claims that the safety aids have also improved, and the Niro now comes standard with features such as pedestrian detection and blind-spot monitors.

The new 2023 Kia Niro will be offered as a regular hybrid, plug-in hybrid, and fully-electric vehicle. According to Kia, the completely electric version is the best option, with a range of 253 miles, which is slightly longer than the outgoing model’s range of 239 miles. They further say that the EV model will have a 201 horsepower motor and a 64.8 kWh battery with a faster charging time.

The regular hybrid has a 139-hp motor and is estimated to have a combined gas and hybrid range of 588 miles. The plug-in hybrid Niro should be able to go up to 33 miles on electric power alone on a single charge.

To this day, Kia had not revealed the price of the new Niro model. The current crossover starts at $25,000 for the standard LX trim level and $32,000 for top-tier EX Premium trim. The forthcoming 2023 Kia Niro will go on sale this summer, in the United States. As before, Toyota Prius will be one of the toughest competitors in the segment.