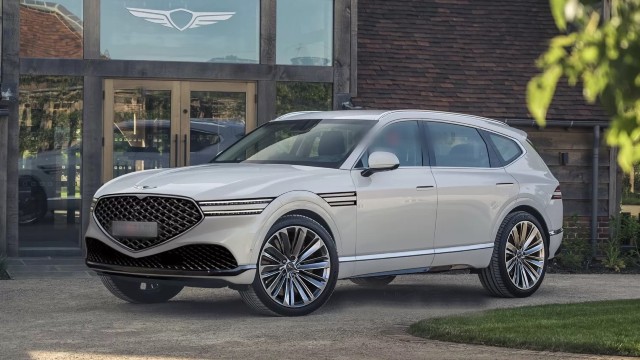 The upcoming 2023 Genesis GV90 is on its way. According to our information, the new SUV will be all-electric and will borrow numerous design ideas from the newly debuted G90 sedan. Furthermore, we anticipate that the first photographs of the prototype will be released in the coming weeks.

Some reports are saying the upcoming SUV will borrow a lot of things from the Kia and Hyundai. Moreover, we anticipate it to ride on a stretched version of HMG’s E-GMP modular EV architecture. If you didn’t already know, this platform has an 800-volt electrical system and a big battery capable of offering a range of up to 300 miles. While we are waiting for the official details, here’s what we know so far.

According to the latest reports, the 2023 Genesis GV90 is on the way. This SUV will arrive with a sleek exterior design with precise lines and small lighting strips. We also anticipate that this model will have a similar grille to the GV80 model, but it will be closed due to the electric system, which does not require extra cooling.

We expect to see a familiar design language. Of course, this means the GV90 will look incredibly stylish and premium. Interestingly, Genesis could borrow a couple of styling cues from Hyundai and Kia, according to reports.

As for the interior, the new 2023 Genesis GV90 will undoubtedly be more modern than the GV80 model. We anticipate that the cabin design of the new SUV will be similar to that of the G90 sedan. As a result, we expect premium Nappa leather upholstery with quilted stitching, an analog clock, and numerous wood trims.

The GV90 should provide excellent comfort, and with three rows of seats, it will be able to accommodate seven occupants. The infotainment system will most likely include a 12.3-inch touchscreen, voice recognition, wireless charging, and the latest phone integrations.

As previously stated, the brand-new 2023 Genesis GV90 would most likely ride on HMG E-GMP modular EV architecture, which is also used on the recently revealed Kia Concept EV9. The Kia Concept EV9 is powered by an 800-volt electrical system and has a range of up to 300 miles thanks to that platform.

According to Kia, a 350-kilowatt charger can charge the battery from 10% to 80% in under 30 minutes. This is not official yet, of course. We can only confirm that the new GV90 SUV will be an all-electric model. Further details will be released in the coming weeks.

The forthcoming 2023 Genesis GV90 will most likely employ the same electric system as the Kia Concept EV9. According to the latest reports, the GV90 will be tied to the G90 sedan and will use the design language of the GV80 model.

At this time, the company has not revealed any details on the launch date or pricing. However, we anticipate that this model will hit the dealerships later in 2022.