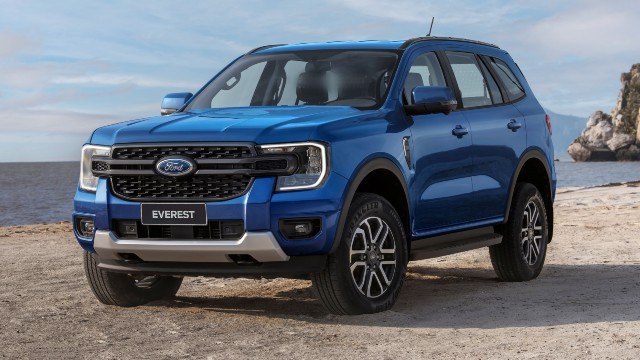 The 2023 Ford Everest is coming to the markets next year. So far, we saw a couple of spy photos and interesting renderings. The improvements are very likely and some of them will be significant. Blue Oval offers Ford Bronco, a Ranger-based SUV, in the United States. Everest is a Ranger-based SUV, but it is sold in Australia. Moreover, Everest comes with three rows of seats and a potent diesel engine.

This body-on-frame SUV will sit on the new architecture, which is another novelty. In India, Everest is available as the “Endeavor” model. The first-gen Everest lasted until 2015 before the second-gen Everest arrived. Without further ado, this is what you need to know about the new 2023 Everest SUV.

The newest renderings of the 2023 Ford Everest are here. The rendering images are a combination of the latest spy photos and styling cues taken from the current Ford Ranger truck. Before we dwell on new styling, we must say the 2023MY will most likely sit on the new T6.2 platform. Naturally, the same architecture underpins the new Ranger workhorse. This chassis widened the Ranger model by two inches, so Everest SUV will also slightly grow in size. New suspension dampers are relocated, which should improve the ride quality.

As for the new design, spy shots are showing the 2023 Everest with a tougher look, especially upfront. We can easily spot the C-shaped LED headlights and smoother front grille. Moreover, bumpers are bolder than before. The renderings are also interesting, as we are looking at the Everest SUV with styling cues taken from the 2022 Ranger. Some things are borrowed from the new Expedition SUV, which is also interesting.

The all-new interior of the 2023 Ford Everest, on the other hand, is the star of the show. While the spy photos show the base trim level with a small central infotainment screen surrounded by physical controls, higher-spec models will have a much larger color touchscreen interface with SYNC4.

The temperature control unit is familiar, but the biggest changes occur on the center console, where a new rotary gearshift selection dial replaces the classic shifter featured on current Ranger and Everest models.

The upcoming 2023 Ford Everest will feature a variety of powertrain options under the hood. To begin with, there’s a 2.0-liter four-cylinder engine. Furthermore, the Everest SUV has the same 2.0-liter engine, but with a twin-turbo configuration. A 3.0-liter V6 turbodiesel engine with 10-speed automated transmission delivers excellent performance.

Finally, a plug-in hybrid powertrain will be available, according to the latest reports. As you can see, the engine lineup is similar to that of the Ranger pickup truck. Two models will have the same design, and the next Ford Bronco SUV will have a similar mechanical system. We don’t know if the manual transmission will be offered as standard once again.

The price of the forthcoming 2023 Ford Everest is not available at the moment. However, we expect a minor jump in terms of price. This popular SUV will go on sale in Australia, probably next summer.