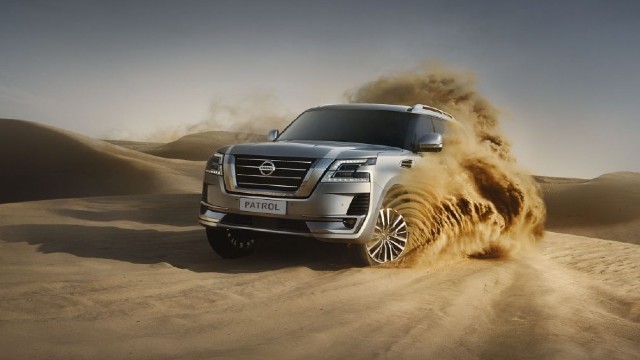 New 2022 Nissan Patrol is a large SUV, also known as “Armada” in some other countries. Two models are basically the same, without any real differences. Of course, Armada is sold in the United States, while Patrol is popular in the Middle East. New Armada shows how the new Patrol will look like. The Patrol SUV will host a lot of upgrades, and some of them are significant.

The goal is to deliver a more handsome SUV, which is a tough task as Patrol is a big SUV. Interior will also gain a lot of updates, but things under the hood will largely remain. The sales will begin by the end of the year, and here’s what you need to know.

The upcoming 2022 Nissan Patrol will gain various cosmetic upgrades. Just like its Armada sibling, Patrol will offer a new front fascia. For a start, the headlights are reshaped and larger fenders are also present. The new grille looks astonishing in our opinion. Overall, the front section now looks more premium and modern. This grille wears more chrome accents than before as well.

The entry-level Patrol SUV comes with standard 18-inch alloy wheels. 20-inch rims are optional, while the 22-inch units are the most expensive option. Patrol will once again introduce numerous trim levels and packages, so this full-size SUV is easy to customize. The popular Midnight Edition package is once again in the offer, which is great.

The forthcoming 2022 Nissan Patrol also comes with numerous interior updates. The full-size SUV won’t suffer any dimensional changes. On top of that, its interior layout also remains. However, the 2022 Patrol will introduce a new cabin design. Thanks to that, the new model will be more modern and more premium. The list of standard features is long, but Nissan will also deliver new optional amenities.

That mostly includes driver-assistance aids. Patrol offers a room for eight passengers and its comfort is surprisingly admirable. The cabin is spacious, in all three rows and the cargo area is also generous. The Japanese manufacturer is working on new infotainment and Patrol should introduce a larger 12.3-inch display.

Same V8 Engine Under the Hood

Things under the bonnet will remain intact. This means the 2022 Nissan Armada will continue to offer its potent 5.6-liter V8 engine. It is a gasoline powertrain option that develops 390 horsepower and 395 lb-ft of torque. Armada will gain slightly more power, but we don’t know if the Patrol SUV will follow the same path. If that truly happens, the new model will generate around 400 hp and 410 lb-ft of twists.

Nissan offers the same seven-speed automatic gearbox and Patrol is a rear-wheel-drive SUV. Of course, the AWD system is optional once again. New engine options won’t happen in the next year or two, but the hybrid version could arrive later next year.

The forthcoming 2022 Nissan Patrol will now cost slightly more, but its price will once again start below $50,000. The sales should begin in the last quarter of 2021 and Nissan will reveal more info in the coming weeks.