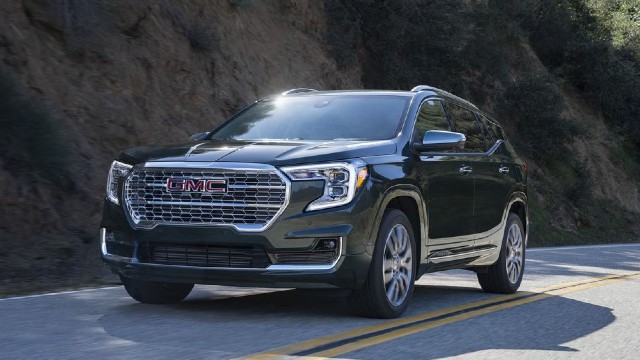 The forthcoming 2022 GMC Terrain has just been revealed, this time with improved design. After several years of waiting, this SUV will finally get the updates it needs. The updated Terrain has a more appealing appearance, a slew of new features, and, for the first time, a new rugged-looking trim level called the AT4, already available on the Yukon SUV.

Other aspects, though, will remain the same, including the engine. The only engine choice for this model is a turbocharged 1.5-liter inline-four with 170 horses. As for the 2.0-liter turbo-four output, this engine was discontinued two years ago and GM has no plans to replace it at the moment.

The exterior of the updated 2022 GMC Terrain is about to introduce certain cosmetic upgrades. In general, the AT4 and Denali trims are the highlight of this new crossover SUV. The AT4 is the brand-new trim level, available on some other models as well. Interestingly, GMC has just posted a new batch of images, and we must say, the Terrain has more eye-catching styling than the rest of the lineup.

Both Denali and AT4 variants have a new front fascia as well as reshaped headlights and taillights. The new AT4 package is visually appealing, and it comes with more unique stuff, including wheels, black chrome grille, black wheel arches, and badges. This model even has a front skid plate, which clearly suggests the Terrain AT4 version will be an off-road capable model.

GMC says that the new Terrain would have higher-quality materials, including the upholstery. The interior of the 2022 GMC Terrain will offer different upholsteries for each trim level. However, the seating arrangement remains the same, and this compact SUV has two rows of seats. The “L” variant with three rows is still just a rumor, and nothing is official.

In any case, expect all versions to have a new infotainment system, Wireless Apple CarPlay, and Android Auto, most likely as standard. General Motors also confirmed the all-new head-up display will be optional in all trim levels, except the Denali version.

Under the hood, the new 2022 GMC Terrain will offer only one powertrain option. It is a 1.5-liter turbocharged four-cylinder engine, mated to a 9-speed automatic transmission. On top of that, this gasoline engine is able to produce up to 170 horsepower and 204 lb-ft of torque. Like the current Terrain, the new one also offers a standard front-wheel-drive setup.

However, an all-wheel-drive system will be optional once again. As we said, the 2.0-liter turbocharged engine is not making a comeback, as some reports predicted. Terrain delivers 25 mpg in the city and 30 mpg on the highway. Loading an optional AWD system lowers the fuel economy ratings, but not significantly.

The upcoming 2022 GMC Terrain will cost $26,000. On the other hand, the range-topping Denali trim level will most likely start at above $40,000. The sales will begin later in 2021, probably this fall. Electrification is not on the cards at the moment, but the 2023MY could arrive with some sort of hybrid powertrain option.