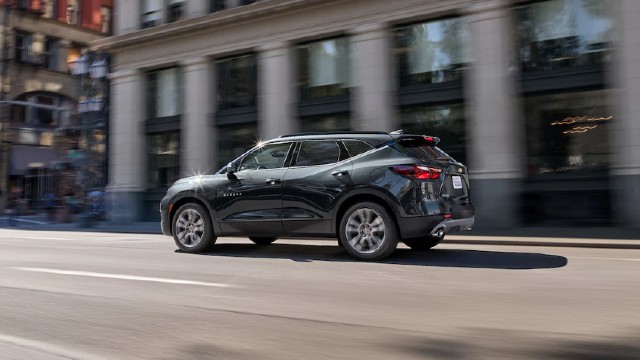 The upcoming 2022 Chevy Blazer is the fourth model in the first generation. The mid-size SUV is present since 2019, so we don’t expect significant changes and upgrades. The Blazer is a model that wears almost a brand-new styling so the new model will be a carryover. Back in the days, Blazer was a truck-based SUV, one of the biggest Ford Bronco’s rivals.

Now, it is a mid-size SUV with a stylish appearance and a very modern interior design. Generally, we could say that the Blazer is a car-based crossover. Whatsoever, Blazer is closely related to the Camaro model. The sales will begin later in 2021, and here’s everything you need to know.

Chevrolet introduced its Blazer in 2019 as a mid-size SUV with a sharp design. As we said, this is a relatively fresh model so the 2022 Chevy Blazer won’t introduce major upgrades. This SUV wears the same exterior features as the previous model. The front fascia wears a design that is closer to the Camaro sports car.

Thanks to that, the mid-size SUV comes with slim headlamps and a larger two-tiered grille. The fenders are sitting higher and the sloping roofline remains the same. The rear section hosts large exhaust outlets and the same rear spoiler. Blazer will once again offer the Driver Confidence II package, which is a very popular buying option among the customers.

The forthcoming 2022 Chevy Blazer offers a premium interior design with plenty of high-tech features. We like those larger circular air vents and the flowing trim pieces. Moreover, Blazer offers a unique speedometer that sits in the instrument cluster. As we said, this is a mid-size SUV but its cabin space is surprisingly generous. There will be two rows of seats and a room for five passengers.

As for the changes, this model will only offer various technology updates, such as a new infotainment system. Furthermore, Blazer should offer more driver-assistance features as well. The base model still offers the same eight-inch touchscreen, Android Auto, Apple CarPlay, and Wi-Fi hotspot.

Under the hood, the new 2022 Chevy Blazer continues to offer three engine options. A 2.5-liter four-cylinder engine with 193 hp and 188 lb-ft of torque is standard once again. Blazer remains the front-wheel-drive model and an all-wheel-drive setup is not available with this engine. However, the optional 2.0-liter turbo-four does offer an AWD system and it develops 277 horsepower and 258 lb-ft of torque.

Lastly, there is a 3.6-liter V6 engine as another optional powerplant. A potent V6 engine can produce up to 308 horsepower and 270 lb-ft of twisting power. No matter which engine you choose, a nine-speed automatic transmission is available.

Unfortunately, we are still waiting for more specific details regarding the 2022 Chevy Blazer. The mid-size SUV will reportedly arrive this summer. However, Blazer will probably go on sale later in 2021, around November. The price won’t change so the Blazer SUV will start at $30,000 and the range-topping trim level will cost up to $45,000.