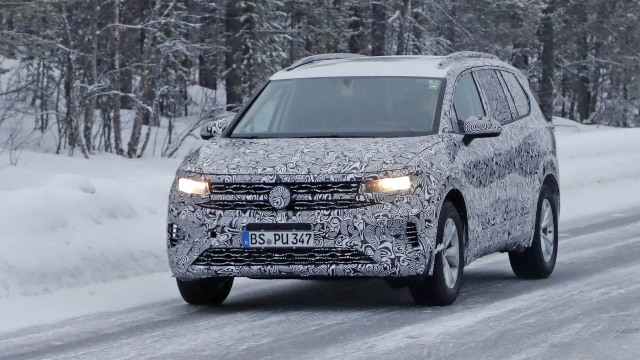 Like any other manufacturer, Volkswagen is also adding more models to its SUV lineup. The upcoming 2021 VW SMV is the latest model that is based on the concept that carries the same name. The latest spy shots emerged online, and we have seen a new German SUV. According to the first reports, this model will be sold in China and Europe. Of course, the ultimate goal is to reach America soil.

Interestingly, the 2021 SMV will be the largest SUV that rides on a famous company’s MQB platform.  Even the interior photos are available, and we can spot a couple of very cool features. Lastly, this SUV will deploy a turbocharged engine, and we can also expect optional powertrain in the offer.

The spy photos of the 2021 VW SMV leaked online a couple of days ago. It seems like the German automaker will slightly depart from the original SMV concept. This SUV will be 201 inches long, and it really looks huge. Moreover, it is the largest vehicle that rides on the MQB architecture. The concept was revealed last April, and since then, we’ve been waiting for the production model.

The prototype looks closer to the minivan than the actual SUV. The roofline is relatively flat, which should provide ample headroom. On the other hand, we are not sure that the production model will look as appealing as the concept. The SMV model also looks toned down, and it hosts small air intakes. The light strip from the concept is not available, which is another surprise.

In April, Volkswagen released a blacked-out SMV concept. For that reason, we couldn’t see what’s inside this SUV. From what we know, the new 2021 VW SMV is a seven-seat model. Moreover, this SUV will offer ample legroom and headroom in all three rows. However, spy photos are showing at least something. For a start, a large infotainment screen is visible at first glance.

On top of that, the digital instrument cluster and flat-bottom steering wheel are also available. The center console comes with floating design and a tiny gear selector. Additionally, the SMV model will offer large storage, probably for an optional wireless charging pad. Lastly, leather and Alcantara upholstery with contrast stitching are in the offer too.

Once it arrives, brand-new 2021 VW SMV will deploy a 2.0-liter four-cylinder turbocharged engine. Exact engine specs aren’t available yet. On the other hand, a 2.5-liter VR6 turbocharged powertrain will be optional. This unit is capable of producing 295 horsepower and 368 lb-ft of torque. Both engine options will be available with a 7-speed dual-clutch automatic transmission.

Moreover, the AWD system will be optional on the base trim level. Most likely, upper trim levels will offer this sophisticated system as standard. Some reports are already speculating about a high-performance version. We’ll provide more details once it becomes official.

The forthcoming 2021 VW SMV will be larger than the Atlas model. Like any other automaker, Volkswagen is also trying to deliver different sizes in the SUV segment. SMV model will be produced in China. With that in mind, we don’t expect the sales will go anywhere else, at least in the first year. However, in 2022 we can see this SUV in Europe, and maybe in the United States. In China, sales will start at some point in 2021.