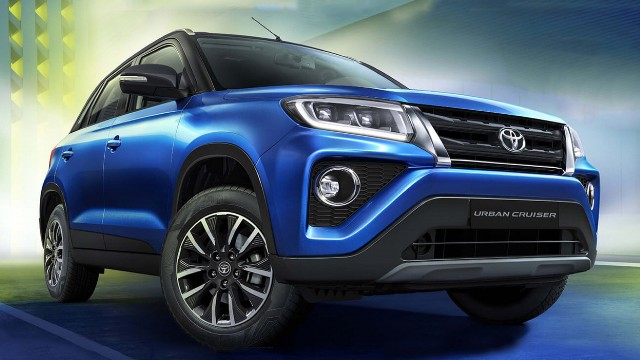 The forthcoming 2021 Toyota Urban Cruiser is going on sale in the coming months. Toyota is improving its crossover lineup in every corner of the world. Of course, Urban Cruiser won’t reach the American shore, but it should represent a popular option in Asia. Whatsoever, Toyota launched new Harrier, Corolla Cross and Yaris Cross variants. Now, the Urban Cruiser is in the works.

The manufacturer revealed its new model, and it is a “badge-engineered” Suzuki Vitara Brezza. This crossover will be sold in India, but Toyota didn’t just change the vehicle’s name and the badge. Instead, the subcompact crossover will depart from the Vitara Brezza model in so many ways. Take a closer look.

The very first photos are showing new 2021 Toyota Urban Cruiser as a smaller Fortuner. Some things are completely different, however. That includes a redesigned front bumper, and trapezoidal fog light surrounds. The two-slat grille remains intact, and Toyota offers LED headlights and taillights as standard on all trim levels.

Moreover, 16-inch wheels are providing both stylish and more rugged appearance. The rear part is still a mystery. However, based on the photos, Urban Cruiser will retain the taillights that are offered on the Vitara Brezza model. Lastly, we like the funky exterior paint that Toyota offers. More details will become available in the coming weeks.

A few days ago, first interior photos appeared as well. The upcoming 2021 Toyota Urban Cruiser is a rebadged version of the Suzuki Vitara Brezza, and the photos are proving exactly that. The subcompact crossover will utilize a plush interior finished in a dual-tone dark brown color. The cabin is practical, but it looks modern and unique. It is more than a solid combination of space and utility.

Thanks to that, Urban Cruiser will represent a practical crossover for everyday use. The Japanese manufacturer will provide some interesting features, including the start/stop button, automatic air conditioning and the Smart Playcast infotainment touchscreen. Furthermore, Android Auto, Apple CarPlay and electrochromic rearview mirrors are all available as well.

Under the hood, the 2021 Toyota Urban Cruiser will deploy a K-Series 1.5-liter four-cylinder engine. We like that Toyota offers both manual and automatic transmission. Moreover, this engine comes with the lithium-ion battery that provides torque assist, idle start-stop and regenerative braking systems.

The performance specs are not available, and Toyota only said that the Urban Cruiser will provide “superior fuel efficiency.” The Suzuki Vitara Brezza is using a 1.5-liter engine as well, and it generates 103 horsepower and 101 lb-ft of torque. As for the Urban Cruiser, we think the subcompact crossover will produce more power.

The price of the new 2021 Toyota Urban Cruiser is not available at the moment. We expect a slightly higher starting price than the Suzuki Vitara Brezza. The sales will begin in the coming months. Moreover, this model will debut in India. Lastly, we can’t say if Toyota plans to sell its subcompact crossover somewhere else.