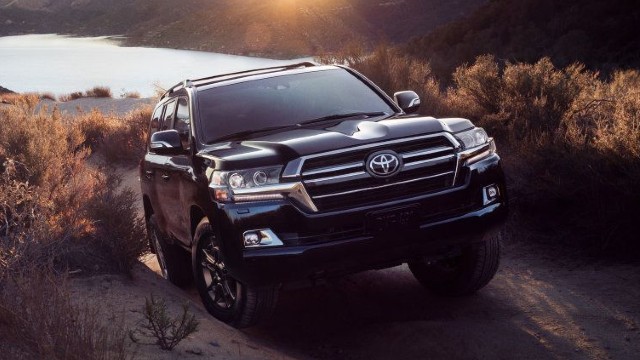 Toyota has discounted its Land Cruiser SUV from some markets, including India. The current generation has been present for more than a decade. However, the 2021 Toyota Land Cruiser will be the next-gen model. New leaked photos are showing exactly what we hoped for, a total redesign. The prototype that was caught on camera and some of the latest changes are visible at first glance.

Toyota will also improve the interior design and comfort will be better than before. Under the hood, a new engine is more than probable, and even a hybrid powertrain is in the works. The sales of the new-gen Land Cruiser will start later in 2020.

The 2021 Toyota Land Cruiser will gain numerous exterior updates. Redesigned SUV will introduce a new trapezoidal grille. Design is now closer to the rest of Toyota’s SUVs, which is a good thing. The previous model looks outdated and not that stylish. The front fascia is dominated by a more upright grille that also wears more chrome accents.

The bumper is wider, and that includes the air inlet. Even the fog lamps are enlarged. Upper trim levels will offer a new sunroof. Toyota will also deliver new alloy wheels. Dimensional changes are a possibility. Land Cruiser SUV will continue to ride on its body-on-frame architecture. However, accommodating hybrid powertrain could force Toyota to make the new model slightly larger.

On the inside, the new 2021 Toyota Land Cruiser will gain a more modern look. On top of that, Toyota will improve tech goodies. That includes a new touchscreen, a new infotainment system, and updates the Toyota Safety Sense suite. Upper trim levels will get premium features such as wireless charging.

The comfort will be at a higher level now, and even the interior room could be improved. As we said, the new Land Cruiser could be longer than its predecessor. Thanks to that, more ample legroom is a possibility. We are still waiting for the Japanese manufacturer to release official interior details.

Toyota will ditch the current 4.5-liter V8 engine in favor of a new six-cylinder turbocharged unit. Moreover, the new 2021 Toyota Land Cruiser will feature a hybrid powertrain as well. A new engine should be able to produce between 400 and 450 horsepower. As for the hybrid powertrain, it will combine a 3.5-liter V6 with an electric motor.

Total output will deliver 295 hp and 356 lb-ft of torque. As we said, body-on-frame TNGA architecture remains, but it will suffer small modifications. Toyota opted for the same platform because it provides better off-road capabilities. Next-gen Land Cruiser will offer a CVT transmission, and a four-wheel-drive setup will be optional.

The forthcoming 2021 Toyota Land Cruiser will cost more than its predecessor. This is the new-gen model that will deliver a lot of upgrades. For that reason, the price will start at around $90,000.

Toyota will introduce a hybrid variant and new Heritage Edition as well. However, we are still waiting for the official price to come out. New Land Cruiser will be launched later in 2020. Interestingly, but the sales will firstly start in India.