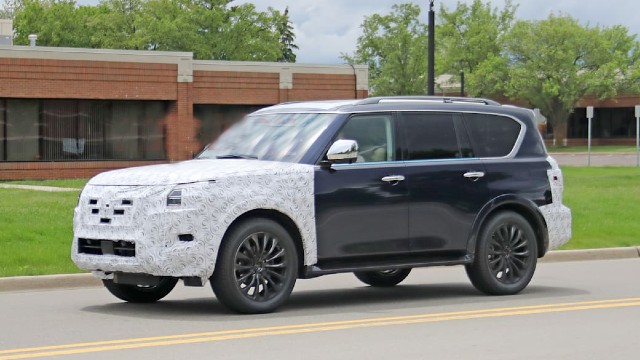 The upcoming 2021 Nissan Armada has been spied for the first time. This SUV rides on its second generation that went on sale in late 2016. The spy shots are showing Japanese manufacturer working on latest refreshments. This three-row SUV will wear a couple of cues that are almost the same as on the Nissan Patrol. Still, a redesign is not on the cards for 2021.

For that reason, Armada will introduce mid-cycle refreshments. Nissan is keeping its SUV competitive until the next-gen model arrives. Speaking of which, Armada will compete against Ford Expedition, Toyota Sequoia and Chevy Tahoe.

As we said, a couple of styling cues from the 2020 Nissan Patrol are providing a few hints at what to expect from 2021 Nissan Armada. The front part hosts upgraded headlights with a new design. Interestingly, the headlights are the same as on the Patrol model. Two models are also sharing the similar design of the complete front fascia. The front end now looks more upright and it sports sharper angles.

The new bumper is visible on the spy shots. Again, Patrol comes with deeply set bumper inserts and Armada hosts the same thing on these spy photos. As for the rear end, new taillights are easy to spot. Also, the rear bumper is tweaked and generally, Armada looks refreshed but we can’t call this SUV unique.

Unfortunately, interior photos are not available. The 2021 Nissan Armada will most likely feature the same cabin design with the same seating layout. However, some changes are easy to predict. For a start, this three-row SUV will get a new infotainment system. Moreover, the same system can be found in the latest Infiniti QX80 model.

This is a must for Nissan as the current system in Armada is out of date. We hope for the Japanese manufacturer to offer the same 8-inch touchscreen as in the QX80. Whatsoever, don’t be surprised if Nissan provides a larger 9-inch infotainment screen that is available in 2020 Titan pickup.

Engine Remains But Diesel is a Possibility

The same 5.6-liter V8 that powers the current Armada will power the new model too. The 2021 Nissan Armada will produce 390 horsepower and 395 lb-ft of torque. Some fans really like this engine but its fuel economy has been rated at only 16 mpg combined. On the other hand, it can tow up to 9,000 pounds. Still, this potent V8 can get some tweaks as the 2020 Titan’s output.

That includes increasing horsepower by ten and providing a new nine-speed automatic transmission. Now, Armada is available only with the seven-speed automatic gearbox. Rumors about diesel powertrain are still present. We don’t know if that’s going to happen in 2021. If it happens, Armada will arrive with a 5.0-liter with 320 hp and 555 lb-ft of torque.