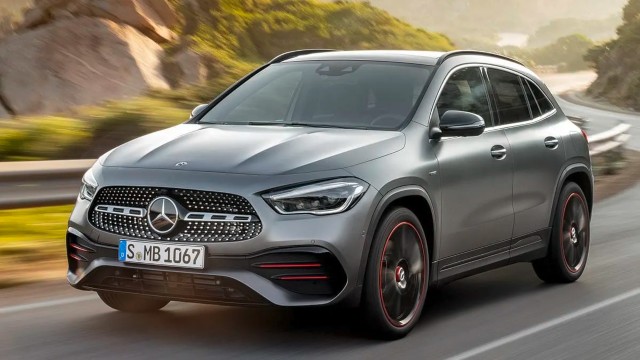 Mercedes has no plans to stop with updating its crossovers and SUVs. Everything started with the revamp of its sedan lineup. Now, the 2021 Mercedes-Benz GLA is getting further updates. The new model will introduce more interior room and a new infotainment system. New Mercedes’ SUV is both wider and taller than its predecessor.

Design is now closer to the GLE SUV, but GLA is smaller. The interior is offering more upscale materials and more tech. Moreover, the turbocharged four-cylinder engine is providing great performances. Speaking of that, the AMG variant is also available and it provides even more power. The sales will start next summer while the GLA AMG will hit the roads later in 2020.

2021 GLA is Larger, and it Looks More Upright

The current model looks like a raised hatchback and is similar to the CLA sedan. However, the all-new 2021 Mercedes-Benz GLA is different, and it does look like a real SUV. German automaker opted for a rounder design with sharp edges. Thanks to that, styling look more aggressive. The front fascia hosts a prominent grille and the pillars are stretching to the roof.

In that way, the design is less dramatic and it looks more upscale. Interestingly, but Mercedes decided to enlarge its new model. The 2021 GLA is now both wider and taller. On top of that, it will arrive with a longer wheelbase than its predecessor. The rear part will get reshaped taillights and this SUV will ride on standard 18-inch wheels.

Like before, the interior of the 2021 Mercedes-Benz GLA is similar to the CLA and A-Class models. Nothing new, as the interior looks incredibly upright and modern. However, Mercedes won’t stop there. New SUV will gain a larger screen that takes half the width of the dash. The new infotainment system is also available. Mercedes call it “MBUX” and it comes with multiple displays. This system is very responsive and easy to use.

However, some of the controls are so easy to activate that sometimes you can do it unpurposely. The German manufacturer will also provide more standard features on the base model and will introduce new tech. Thanks to the latest dimensional changes, the interior will now offer more legroom, especially for the rear occupants. Comfort is great and everything about GLA SUV looks premium.

The approaching 2021 Mercedes-Benz GLA will use the same engine as its predecessor. It is a 2.0-liter four-cylinder that comes with a turbocharger. Moreover, this engine is using an 8-speed dual-clutch automatic transmission. Unlike the 7-speed gearbox in the CLA model, the new transmission will surely provide smoother shifting and better ride quality.

The regular model is producing 221 horsepower. However, if you want better performances, the AMG variant generates 302 hp using the same engine. If you seek an off-road adventure, GLA 250 4Matic with AWD system will get you there. Moreover, this variant offers a standard Off-Road Package. A plug-in hybrid version is speculated and it could make a debut shortly after the EQA model.

The price of the brand-new 2021 Mercedes-Benz GLA will start at around $40,000. Once it arrives, this SUV will compete against Audi Q3 and BMW X2 models. Moreover, Land Rover Range Rover Evoque is another serious competitor.

The release date isn’t available yet. However, you can expect Mercedes’ new SUV later in 2020. A couple of months later, the AMG version will also reach the markets.