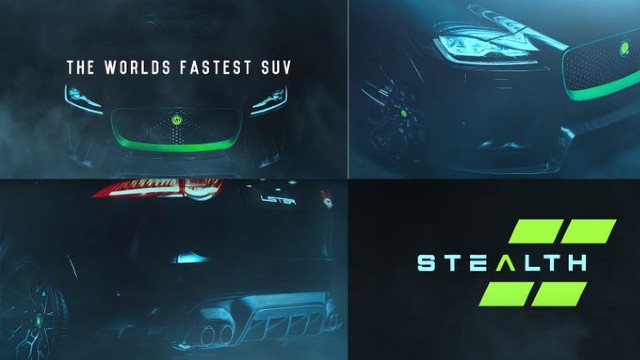 Tesla Model X, Jeep Grand Cherokee Trackhawk, Bentley Bentayga, and Lamborghini Urus. These are the fastest SUVs you can get on the markets. However, that could change in the near future. The upcoming 2021 Lister Stealth could be the world’s new fastest SUV. According to Lister Motor Company, its new Stealth model is all about sportiness and power. Interestingly, but the manufacturer made a tuned version of the Jaguar F-Pace almost two years ago.

Now, we are dealing with something completely new. Stealth SUV looks very impressive but we still don’t know all of the details. Its powerful V8 is impressive and the exterior looks extremely sporty. Interior details are not available yet but some rumors are already present. Lastly, Lister will make only 250 examples in the first year of production.

Lister made its name in motorsports. For that reason, sporty SUV comes as no surprise. The 2021 Lister Stealth comes with an aggressive bodywork. However, the teaser video is the only source of information, for now. In this video, you can see mean front fascia with an aggressive carbon-fiber rear diffuser.

The same diffuser surrounds the quad exhaust tips. Lister badging is everywhere, even on the door sills. The badge also sits in the grille and on the wheel caps. Stealth SUV is full of carbon-fiber styling and it looks very attractive. Lister’s forged wheels are visible as well.

As we already said, interior details are not available yet. From what we know, the new 2021 Lister Stealth should be based on the Jaguar F-Pace SVR. For that reason, expect plenty of similar, if not the same details. The cabin is fitted with extra carbon-fiber styling and a bespoke interior with Nappa leather is certain.

There should be room for five passengers, although a seven-seater is rumored as well. F-Pace SVR comes with a digital instrument cluster and is full of high-tech features. Additionally, expect high safety ratings and a lot of driver-assistance systems.

The teaser video let us hear amazing noise coming out of a supercharged 5.0-liter V8 engine. The 2021 Lister Stealth will become the world’s fastest SUV, according to the manufacturer. It’s a very bold claim but many experts find it achievable. As you know, Bentley Bentayga Speed is currently the fastest SUV with a 190-mph top speed. Stealth SUV will generate 675 horsepower. Lister said the SUV will accelerate from 0 to 60 mph in just 3.5 seconds.

Moreover, Stealth’s top speed has been rated at 200 mph. If this turns to be true, then Stealth will become the fastest SUV on the planet. Lister will offer an eight-speed automatic transmission with a standard four-wheel-drive system. Moreover, new supercharger, intercooler, air filter, and remapped engine control unit are available as well.

The upcoming 2021 Lister Stealth will be the manufacturer in 250 copies. We don’t know if the automaker will raise that number in the future. Anyway, Stealth will surely become one of the world’s most-wanted SUVs. Its price should start at around $150,000. The sales will start later in 2020, according to the latest reports.