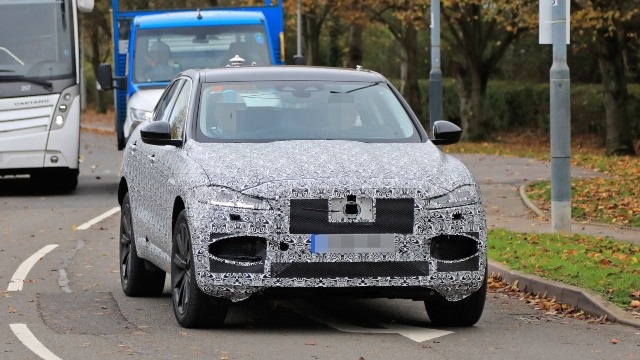 The forthcoming 2021 Jaguar F-Pace is set for a facelift and further interior changes. On top of that, this SUV will get a new diesel-electric hybrid powertrain. That is another addition besides the existing gasoline-electric version. This model will arrive in North America next April at the New York Auto Show. Still, don’t expect significant upgrades as Jaguar is more willing to deliver mid-cycle refreshments.

New spy shots are confirming those claims as the F-Pace has been spotted in Spain and the UK. Visually, new exterior features are visible while the interior is set for less drastic changes. The sales should start shortly after the New York Auto Show.

As we already wrote, the 2021 Jaguar F-Pace has been spotted in Spain and the United Kingdom. A new set of images has been released and it looks like the prototype wears a couple of new exterior features. Heavy camouflage perfectly hides some parts of the SUV. On the other hand, most of the updates are visible at first glance. That includes new headlights and taillights.

Both units will use LED technology, even on the base trim level. Moreover, the bumpers are redesigned, and side skirts are modified too. The platform will remain, which means the vehicle’s dimensions are unchanged for 2021.

When it comes to the interior, the new 2021 Jaguar F-Pace is getting further updates. However, the updates aren’t that significant as on the outside. For a start, this SUV will gain new active safety features. On top of that, the cabin is refreshed in the same way as Jaguar did with the rest of the new models. That includes new displays that are more responsive and larger.

A digital instrument cluster is also getting a bigger infotainment screen. Another touchscreen is responsible for the HVAC controls. Jaguar will also offer new chrome trims, interior color schemes and the redesigned steering wheel with a gear selector. Optionally, new ambient lighting is available.

As for the powertrain section, the approaching 2021 Jaguar F-Pace continues to offer a 2.0-liter four-cylinder turbocharged engine. Moreover, in Europe, you can buy this SUV with a diesel powertrain. However, the big news is the new inline-six mild-hybrid system. This system will use a 3.0-liter gasoline engine with the 48V technology. This output will deliver around 400 horsepower and 405 lb-ft of torque.

These figures are currently present in Range Rover Sport, and we believe that F-Pace will get the very same output. The latest reports are also announcing an all-new diesel-electric hybrid system. At this moment, we don’t know which four-cylinder diesel will be paired with hybrid technology.

The new and facelifted version of the upcoming 2021 Jaguar F-Pace will go on sale next year. Geneva Motor Show is in March, which is a possible date for its debut with the sales to start a few months after that.

Moreover, New York Auto Show is in April, which seems to be the most realistic option for this SUV. As for the pricing details, Jaguar is silent on this subject. However, we are convinced that the new model will get a small jump in price.