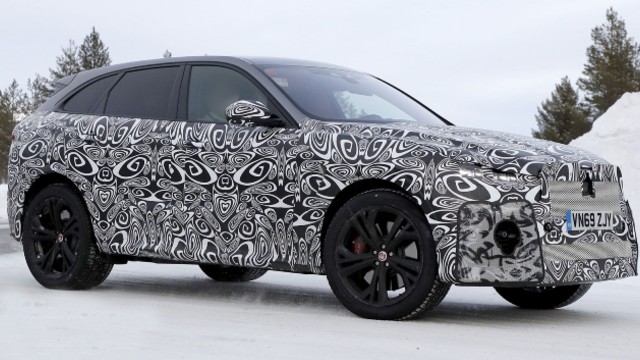 It is another refreshment for this high-performance SUV. The 2021 Jaguar F-Pace SVR has been spotted with numerous exterior modifications. The spy shots are clearly suggesting mid-cycle updates, rather than the redesign. F-Pace is the company’s first crossover SUV and it is currently the best-selling vehicle as well. SVR is a sportier version with stronger performances.

Its design departs from the regular F-Pace in every possible way. Moreover, even the interior is providing a sportier vibe. The changes inside the cabin will be more major than ever before. Unfortunately, the exterior is about to get minor improvements. New F-Pace SVR will arrive later this year.

New spy shots of the 2021 Jaguar F-Pace SVR are showing a prototype with a lot of camouflage. The camo hides most of the parts but mid-cycle refreshments are still visible. For instance, quad exhaust outlets, red calipers, and larger air intakes up front are visible at first glance.

Moreover, SVR will retain its athletic stance and generally, this crossover-SUV comes with an extremely sporty vibe. You can also expect usual upgrades such as small revisions of the front and rear fascia. The grille has been updated, along with the headlights. The rear part hosts revised taillights and a new bumper.

The cabin of the 2021 Jaguar F-Pace SVR looks incredibly sporty. When it comes to interior upgrades, you can expect some major updates. First of all, the analog instrument cluster is gone. Jaguar will introduce a digital one, the same you can find inside the new F-Type model. Moreover, Jaguar is about to add Android Auto and Apple CarPlay as standard.

Adding wireless into the cabin is another likely possibility. SVR variant comes with a full suite of luxury features. That includes numerous driver-assistance aids such as adaptive cruise control or blind-spot monitoring. On top of that, steering assist, park assist and a rearview camera are all in the offer.

In terms of performances, this high-performance crossover-SUV will continue to use a 5.0-liter engine. This powerful V8 gasoline engine is producing 550 horsepower and 502 lb-ft of torque. The credit goes to a supercharger. Moreover, AWD system, brakes, and improved handling are also contributing to such an amazing performance.

The power goes through a standard 8-speed automatic transmission. The range-topping model accelerates from 0 to 60 mph in 4.1 seconds. The arriving model won’t be slower but we also don’t expect for SVR version to get any faster.

The price of the all-new 2021 Jaguar F-Pace SVR starts at $81,000. Arriving crossover-SUV will arrive at some point in the second half of 2020. So far, Jaguar didn’t provide any official details. However, we can expect more information in the coming weeks.