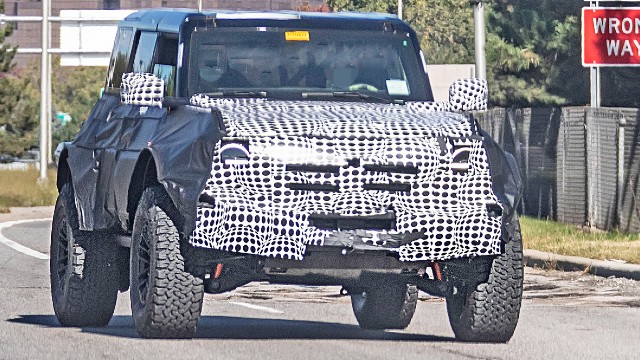 The return of the Bronco SUV is the big news for the Blue Oval manufacturer and the automotive world. On top of that, the 2021 Ford Bronco Raptor will also hit the dealerships in the coming months. Bronco will represent a family of off-roading SUVs and the plan is to rival Jeep Wrangler. In July, Ford announced two and four-door body styles, next to the Bronco Sport version with the turbocharged powertrain.

Now, it seems like Ford is not done and an iconic Raptor variant will also go on sale. This is a high-performance version so the Bronco’s off-road ability is taken onto another level. Interestingly, we’ve seen the spy photos of the new Bronco Raptor (Warthog) a couple of months ago. Now, new spy photos are available.

The forthcoming 2021 Ford Bronco Raptor can arrive with only one engine option. While the most powerful version so far comes with a 2.7-liter V6, the Raptor variant will offer more power. For a start, this V6 can produce 310 hp and 400 lb-ft of torque. However, Raptor needs more power so a 3.0-liter turbo-six engine will be offered. The same powertrain is available in Ford Explorer ST SUV.

Thanks to that, Bronco Raptor will generate 450 horsepower and 510 lb-ft of torque. However, some reports are writing about 375 horses and 470 lb-ft of twisting power. No matter what happens, the Raptor model will arrive with plenty of power. The most important thing is that this engine would fit in the Bronco’s T6 platform.

2021 Bronco Raptor – What About the Rest of the Upgrades?

The high-performance version will need a couple of mechanical upgrades. The 2021 Ford Bronco Raptor will get a beefier suspension. Moreover, this SUV will arrive with unique beadlock-capable wheels. We are talking about 17-inch rims that are seen in the spy photos. Ford will add new Bilstein shocks, a high-performance off-road suspension, and 35-inch off-road tires.

The spied prototype was wearing 35-inch Sasquatch-spec tires but BFGoodrich all-terrain tires should be in the offer as well. Lastly, Bronco Raptor comes with electronically controlled orange shocks with active dampers.

At this moment, we know the Bronco SUV will be sold in six trim levels. That includes the base, Big Bend, Black Diamond, Outer Banks, Wildtrak and Badlands trims. The 2021 Ford Bronco Raptor is not official yet. Interestingly, the Raptor name is just a possibility. As you can see, Bronco offers trim levels that are named differently than the rest of Blue Oval’s trims.

That means the Raptor name could be excluded as well. According to various reliable sources, Warthog name is the most likely outcome for this high-performance SUV. This actually makes a perfect sense as Warthog is another tough animal like the Raptor. Ford added fuel to the fire when the Warthog name was used in the trademark application this September.

Historically, the Raptor version never became available at the same time as the regular model. The Raptor always lagged by a year or two and this is about to change. The 2021 Ford Bronco Raptor should arrive at the same time as the regular Bronco SUV. That should happen in the spring of 2021. Still, some rumors are predicting for Raptor variant to arrive later in 2021.