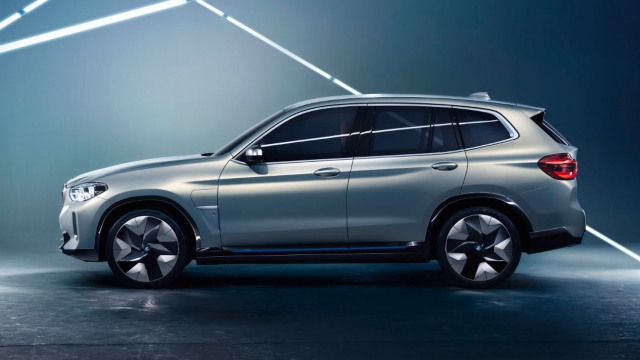 The upcoming 2021 BMW iX3 is the company’s first EV crossover. Moreover, this is just a beginning as the German manufacturer has big plans for the future. Mercedes, Audi and Jaguar already entered the game of all-electric models and BMW now has to catch up. We don’t say that iX3 is the best option you can get, but it is the most practical yet.

Moreover, this crossover-SUV will arrive in the United States as well, although BMW didn’t specify official specifications. The new model won’t affect the already present BMW X3 at all. The two models will share similar styling cues and are looking basically the same. The interior is very premium and the new BMW’s electric model will deliver almost 300 horsepower.

As we just wrote, a new 2021 BMW iX3 will look almost the same as the regular X3 model. Spy shots are available and we can see only one key difference. The grille is closed because of an all-electric powertrain. Interestingly, but iX3 is based on the concept and the very same concept arrived with an open grille.

The same grille looks very stylish and modern. On top of that, it will host numerous sensors that can see through chrome. So, instead of the double kidney grille, the one-piece unit is deployed and it will be very useful in numerous ways.

We don’t know exact specifications for the model in the U.S. However, the European market could give us a glimpse of information. The 2021 BMW iX3 will start with the production in the coming days. It will be a rear-wheel-drive SUV, and its electric motor will produce 286 horsepower and 295 lb-ft of torque. On top of that, its range is rated at 440 km or around 270 miles. The credit goes to a 74 kWh battery pack that will beat the figures of the new Porsche Taycan.

Whatsoever, Taycan SUV should deliver around 200 miles, once it arrives. To compare, gasoline-powered X3 generates 248 hp and 258 lb-ft of torque. Furthermore, the gasoline-powered X3 SUV provides 465 miles of “range” on a fuel tank. It is a no brainer, the electric model delivers more power and it lowers the CO2 emissions.

The competition is growing with basically every second established manufacturer is entering the race for the best all-electric crossover-SUV. Logically, the 2021 BMW iX3 will rival Audi E-Tron and Mercedes-Benz EQC for the best model in Europe. However, BMW has plans to offer its new model in the U.S.

For that reason, Tesla, Rivian, and Ford Mach-E are waiting in line. The company’s new EV crossover will start with the production in the coming days or weeks. According to reliable reports, this model will go on sale later in 2020 as a model for 2021.

The forthcoming 2021 BMW iX3 is just the beginning of the company’s plans. BMW looks very ambitious when it comes to all-electric vehicles. German manufacturer targets a dozen electric models by 2025. You can expect i4 and new iNext models at some point in 2021 as well. Clearly, the list of models continues, and before 2025 we can see one of the strongest all-electric lineups one automaker has to offer.